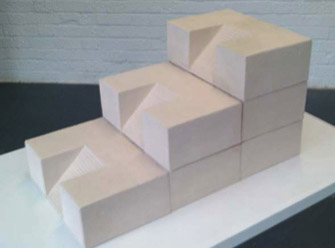 The present version 1 of this art object made of elements with small steps and stone-like appearance, I cast in ceramic in 2009. A very small figure kneels on the top at the “chasm”.

The picture next to it, however, shows the draft of the version 2, with the same kind of building blocks but of concrete, with a smooth surface and in skin colour, thus not quite monochrome. They are also stacked in such a way that they again become stairs. Because these building blocks have also very small steps and are piled twice as high now, this temple-like building seems even higher, almost swaying and the idea of progressing on the top platform is threatening. A figure is no longer necessary in this version.

The stairs, always a metaphor for the history of the development of mankind might, for example, make the viewer reflect about the limitations of higher development or about the finitude of growth versus the infinity of time. Perhaps the viewer also thinks the steps-of-staircases idea ahead, higher and higher, to an imaginary point where one could possibly leave the reality of our everyday experiences.

Another person, however, may interpret it in a religious way and sees more the just as old and distinct metaphor of the stairs as the stairway to heaven. This is to provide a firm hold and to lead to a salvific God, who has never yet brought salvation (apart from salvation of the soul maybe: “I asked God for a bike. Then I realized God doesn’t work that way. So I stole a bike and asked for forgiveness.“ [based loosely on Emo Philips]). But it gets more vacillating during an imagined ascent. At some point that person would leave the „reality“ too.

Thus in both options our viewers would meet again at some point.